People could hardly believe our test results because our motor was so small.

The electric vehicle (EV) business is booming, and E-Axle, Nidec’s traction motor, is the heart of EVs. With a motor, an inverter, a reducer and a driving system combined into a single unit, one can run an EV immediately after installing the unit into the vehicle, and supplying electricity to it.

“Our E-Axle is known for its compact size, among other features. In particular, this unit is at least 20% shorter than other companies’ traction motors. The size of a motor’s diameter is an important element that directly affects torque. While our E-Axle’s diameter is kept short, its power density far exceeds those of our rivals’ products,” says Automotive Motor & Electronic Control Business Unit’ Fukunaga, who leads the team that developed E-Axle.

Fukunaga recalls that those of auto manufacturers were uncertain about Nidec’s E-Axle because of its incredibly small size.

“Even after we showed them data that our product generates sufficient power and torque despite its size, the people were suspicious that there was no way to achieve such power and torque with the motor’s small diameter. Some people even visited us from overseas to see us testing our unit. Even after we showed measurement results in real time, they still looked suspicious, seemingly unable to believe what they were seeing.”

We were able to make such a compact motor because Nidec had made the world’s smallest motors one after another in IT and other fields, accumulating product development-related knowhow.

“For a small motor to achieve a high output, the winding wire of the motor’s stator core needs to be wound at high densities. A motor’s efficiency is determined based on how its wires are squeezed into a limited space. That said, making the iron core too slim to increase the winding wire’s area would cause the magnetic force to saturate, with torque unable to increase any further. We were able to utilize our compact motor-based knowhow to maximize efficiency while increasing the area.”

It is not difficult to increase a handmade motor’s space factor, but E-Axle must be mass-produced. This is why engineers struggled to mass-produce wind wires at high densities.

“In essence, there is a trade-off between high-density wire-winding and decrease in productivity. To enable both, we developed a cassette inserter, a new engineering method of inserting a “cassette” of wires into our motors. This method led us to realize a high space factor while improving our productivity.”

Another issue was how to cool a motor. As wires are wound at higher densities, heat tends to be trapped inside the motor more easily. Water has been used conventionally to cool a high-power motor. However, this method would require water jackets to be stretched around the motor, making its size large.

“This is why we adopted our own oil cooling system, where a motor is immersed and cooled in oil.

Compared with the external water-cooling method, this method has a merit of sufficiently cooling the source of heat. The issue is that, the oil, which is shared as the reducer’s gear oil, is highly aggressive on resin and other materials. We struggled to manage temperature, while, among others, making a design that avoids contact with resin to the maximum extent possible.”

The temperature of the oil, which is used to lubricate gears as well, of course increases. Since, in principle, oil is used without being replaced during its life, the engineers carefully performed tests repeatedly to determine the oil’s specifications.

“We performed tests repeatedly under harsh environments by, for example, running a vehicle at a speed of 150 - 180km/h on an oval course in a desert at a temperature of 50ºC, and constantly climbing a rugged mountainous area near a desert, with temperature exceeding 40ºC. Then we eventually came up with the two-way oil-cooling mechanism, which combines the cooler-cooled oil spraying method, and another method that uses centrifugal force to spurt oil from a rotating motor shaft to cool the winding wires’ edges.”

In the process of making an EV, an unprecedented vehicle, and in a situation that one must not miss its release date, the engineers struggled constantly to mass-produce the traction motor, the EV’s heart. Those struggles were “harsh enough to recall,” according to Fukunaga.

“Current vehicles have more than 100 years of history after employing their current forms, and therefore, in making new models, required specifications and performance are somewhat fixed.

However, that is not the case with EVs, whose history is in the middle of making, and that is why auto manufacturers constantly make requests about their cars while making them. Sometimes, when requested by them to achieve a level of performance so far beyond the level from the design phase, we would feel as if our goal were moving increasingly away from us.”

While targets to develop a product would constantly change, its release date would remain the same. “With all components having to be developed from scratch, I don’t recall a single moment where I felt certain about something in a product development process,” says Fukunaga. Still, all those struggles were certainly rewarded.

“More than 100,000 EVs with Nidec’s E-Axle units are already in the market (as of September 30, 2021). I see many of them running in Guangzhou and other places, and feel so great to see those vehicles on the street. I feel that we were able to exude our presence in the auto industry.”

Nidec’s E-Axle is referred to as the “green whirlwind” in China. Even after making a huge impact in the rapidly changing Chinese market, the traction motor will continue to evolve. 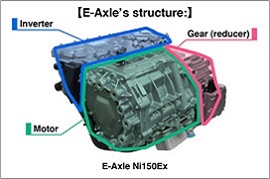 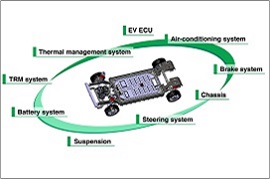 Nidec embarks on the development of a versatile wheeled platform – the crucial element to dissemination of EVs.