Since its inception, the notebook PC has always been required to be thinner. In the 1980s, when there was no such term as “notebook PC,” portable computers, brand-new products at the time, were called “laptop computers.” However, those machines, each weighing more than 5 kilos and 7 – 8cm thick, were not something people could carry easily, and often referred to as “lap crashers” cynically.

Nonetheless, the concept of a battery-installed computer that people can carry with them everywhere was the center of users’ intense focus. People’s voice for computers that they can carry with them anytime and that are thin enough to be slipped into their business bags became the most critical part of PC manufacturers’ market strategies, causing an extremely fierce competition for compact and thin computers in the 1990s through the 2000s.

The entire move to make thin PCs imposed pressure on their devices, ranging from battery to display to hard disk drive.

Since joining Nidec in 1994, Imahori of Small Precision Motor & Solutions Business Unit has been developing had disk drive motors while witnessing the use of notebook PCs spread rapidly.

“Those days, our task was to make motors that could accommodate the hard disk drive’s fast-growing capacity,” Imahori remembers. “Conventional technologies were already approaching their limits, and it was time for us to undergo a fundamental review of them.”

A shorter bearing would increase blurring. How can it be minimized?

The hard disk drive basically comprise of: (i) the head, which write information in signals; (ii) the magnetic body that memorizes the information; and (iii) the motor, which rotates the magnetic body. The head records information i.e., “0” and “1,” on a micro level on the magnetic body. After the disk rotates once, the head must be exactly on the track immediately next to the previous one. However, any rotating body causes blurring. Back then, a hard disk motor would generally have a ball bearing to support its axis – the same mechanism applied to bicycle and automobile tires. The final quality of balls and inner and outer rings would determine the track accuracy. It was to improve the accuracy that Nidec worked with ball bearing manufacturers to invest all available technologies, but such efforts were approaching their limit.

Thus expectations were on the fluid dynamic bearing (FDB), which was expected to become the product for the next generation. The FDB, which special oil is sealed in a bearing that is notched in the shape of a herringbone, and when the shaft is rotated, pressure is generated to support the shaft. Nidec became the world’s first company to successfully mass-produce fluid bearings by utilizing this technology. After their 2000 debut in the market, the FDB was received an overwhelming support from PC manufacturers. Using fluid bearings, HDD motors now required fewer components, and were made thinner. This transformation overlaps with the period when the term “laptop PC” was replaced by another one, “notebook PC.” Those days, HDDs for notebook PCs were 9.5mm, which was a significant change from 10 years prior, but the market’s demand would continue for thinner PCs.

Sato of Small Precision Motor & Solutions Business Unit, who joined Nidec in 2006 recalls, “As the bearing becomes shorter, vibration increases. A longer bearing, has a larger supporting area, rotates more stably. Yet, our customers would demand increasingly more for thinner motors. I would come up with ideas to try them every day, wondering how much thinner we could make our motors.”

After revising oil’s flow path in detail, working on oil leak prevention systems, selecting types of oils, and experiencing many trials and errors, Nidec in 2010 finally launched its 7mm HDD motor. A number of PC and HDD manufacturers adopted this motor, leading Nidec to dominate more than 90% of the world’s market share at one time. This achievement brought Nidec’s ultrathin, high-speed HDD motor to win 2015’s “Invention Award of the Ministry of Education, Culture, Sports, Science and Technology” in a ceremony held by the Japan Institute of Invention and Innovation.

Nowadays, no one would mind how thick a PC is when slipping it into a business bag. Thin motors played significant roles in making thin PCs.

From around 2016, notebook PCs’ storage media gradually started to be replaced by the SSD. Still, the technologies to make thin motors were applied to fan and other components, contributing to making thin PCs even to this day.

“When made thinner, motors can be installed into places where they have not been able to be installed so far,” Imahori says. “In fact, new products, such as fan-installed clothes and face masks, are being proposed.”

Expectations are huge on motors as they open up new markets by becoming thinner.

Nidec was one of the first companies to develop and manufacture fluid dynamic bearings.
FDBs have dramatically accelerated the density increase and noise reduction of HDDs. 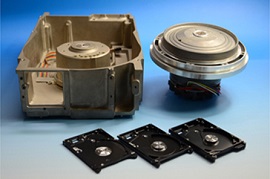