As described in Chapter 1, the synchronous speed of a rotating magnetic field-type motor is determined by the following formula:

There is an important point when we think about induction motors. That is, the coil must traverse a magnetic field to make current flow through the coil.

To that end, there must be a relative speed difference between the magnetic field and coil.

Because of this speed difference, the motor rotates at a speed slightly slower than the synchronous speed.

This speed difference from the synchronous speed is called slip and is indicated by the symbol s. Slip s is expressed with the following formula:

Slip is normally expressed in percentage. Slip of a power induction motor is 2 to 3% when the motor is operated under the rated load. The above value becomes somewhat larger with small single-phase motors.

Fig. 2.40 shows the characteristics of induction motors. When a motor is designed in such a way that impedance of the aluminum conductor of the rotor is reduced, its efficiency is increased in a high-speed range. And on the other hand, when designed to have a high impedance, the motor has an increased amount of torque in a low-speed range.

In the area to the right of the maximum torque on the characteristic curve, increase in the load does not so much reduce the speed of low-impedance motors. The torque increases and becomes stable.

Namely, the speed of these motors remains essentially the same despite the changes in the load.

Fig. 2.41 plots the characteristics of these motors by taking the torque on the horizontal axis and the rotating speed on the vertical axis, with the addition of current and efficiency.

From comparison between this graph and the above characteristics of DC motors, you will find the following characteristic of induction motors. 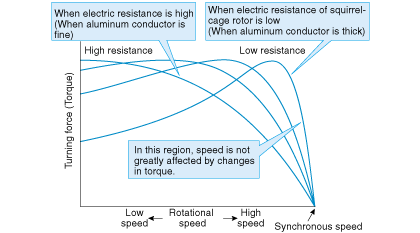